Tales from a butterflying summer

“You count butterflies? They pay you? How do you get that job?”

This was a common refrain whenever I explained what I did for a living.

And they are right: standing on a rise on a sunny day, overlooking a tangle of greenery with jewelled wings flitting in every direction, I could not believe that someone was paying me to do this. Counting monarch butterflies for the Montreal Insectarium was surely the best job in the world.

The summer of 2019 was a great one for monarchs in Canada. But it was also bittersweet for the mottled duskywing (Erynnis martialis): This skipper butterfly–found in rocky outcrops–has disappeared across much of its range. On the glorious day when the photo (above) of my daughter was taken, we were helping Montreal Insectarium entomologist André-Philippe Drapeau Picard search for it.

So how did I get the best job in the world?  Insectarium director Dr. Maxim Larrivée needed someone to analyze the butterfly sightings uploaded to the online butterfly websites eButterfly and Mission Monarch. I undertook this work as a master’s student for McGill University plant scientist Dr. Sylvie de Blois.

This analysis revealed that there seemed to be an unaccountable monarch hot spot on the north shore of Lake Ontario, between Toronto and Kingston (circled area with red dots, Fig.  1). This was puzzling: why are more monarchs found there? They pass fly over the cold spot southwest of Toronto (circled blue dots, Fig.  1), through the ‘desert’ that is urban Toronto, to an area stretching from Prince Edward county up to the Kawarthas. How are conditions better there?

The monarch butterfly is an iconic insect that lays its eggs on milkweed plants, the only suitable food source for its caterpillars.

Every fall, Canadian monarch butterflies born east of the Rockies travel to a mountain range in Mexico where they spend the winter, before mating and flying back north to Texas to lay eggs in the spring (Fig.  2). Subsequent generations live only a few weeks, spreading out to the Midwest and north to Canada. Two more generations are born and die before conditions bring them up between Lake Michigan and Erie along the north shore of Lake Ontario to the hot spot we noticed.

Understanding the presence of monarchs in southern Ontario has become a matter of some urgency, as the monarch population east of the Rocky Mountains has decreased by over 80% since 1994 (Brower and al. 2012; Fig. 3). Most monarchs used to migrate from the Midwest, but changing agricultural practices are thought to have reduced those populations. American monarch watchers are noticing that more individuals seem to be coming from Canada in recent years.

But we know very little about the Canadian population. Is there enough milkweed for them? What is attracting them? 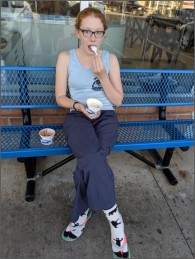 So last summer I set out to answer those questions and to see what could be learned about the whereabouts of monarchs in Canada. I was accompanied by my daughter Maeve, who is able to put up with a lot so long as there is an access to wifi, a shower, and ice cream at the end of it. We visited 80 examples of the uploaded observation sites (Fig. 4) over two weeks at the end of June, and again at the beginning of August.

To monitor the two generations normally born here in Canada, we chose 20 sites in each of the following four regions: the hot spot, the cold spot southwest of Toronto, a neutral region between Toronto and the hot spot, and in urban Toronto itself. I wanted to see what was different about the hotspot, and I was curious about the impact of urban pollinator gardens. 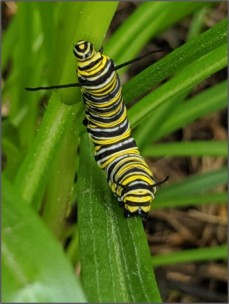 It was a good summer to do this: spring was late, but conditions were ideal by August and monarchs were everywhere. There were some glorious locations in the hot spot: in the Prince Edward peninsula, there were nearly 40 square kilometers of old farmland returning to juniper scrub. We had reports of hundreds of monarchs sighted after walking for only a few kilometers. One of our favorite spots was Uxbridge Countryside Preserve: it contained a remnant of tall-grass prairie, and an intimidating number of milkweed. Just ask Maeve, who stopped turning leaves after 400 plants. 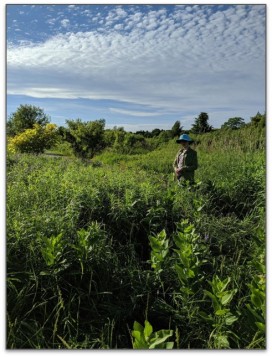 We averaged about 6 sites a day, which made for some long days! A shout out to Google maps, as we could never have moved so speedily without the little blue dot. At every site, we measured environmental factors such as temperature and wind speed, as well as the type of land cover and surrounding land use. Once we listed the plants found within 12 m² plots – representing the center, middle, and edge of the area – we then counted the eggs, caterpillars, and adult butterflies. My daughter was assigned to young monarchs, turning over innumerable milkweed leaves before reaching a total of 2000 juveniles.

It was the best job − most days, that is! My first unscientific conclusion is that monarch butterflies are found in conjunction with mosquitoes, thistles, poison ivy (we trekked through fields of thigh-high poison ivy) … and wasps!

Site Mp117513 will live in infamy: this location was quite remote, along an ATV path so worn down that poison ivy ran along the car doors for kilometers. Then I stepped on a wasp nest while checking the milkweed, and I was instantly covered by furious wasps. They must have got me at least 20 times on each elbow.

On top of this, a lacrosse tournament had occupied all the hotel rooms, and the car started to make an ugly sound. The only room we could find was in Oshawa’s local crack den, the sort of place where waxy men sit on lawn chairs outside their room, and receive a stream of dubious visitors. The sort of place where you get your daughter, your computer, and your data in, bolt the door and pray your car will still be there in the morning. 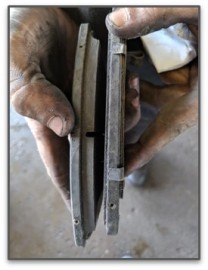 Fortunately, a car wash and new brake pads later, we found more salubrious accommodation at The Hive B&B (above middle), an old church where a colony of bees had taken up residence in the wall. This appealed to my black sense of humor, though I did not want to sleep in the room next to the hive! Apparently, this wall (above right) has leaked honey in the past. 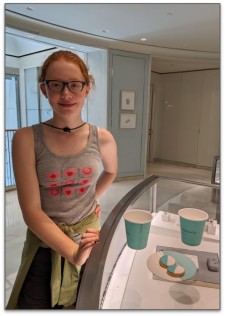 Monarch butterflies can usually be found in a tangle of milkweed, goldenrod and other asters in the sunshine. Such a combination could be found in the unlikeliest of places: someone saw a monarch in this planter on Bloor Street in downtown Toronto (left), opposite the Tiffany jewelry store. So after counting the begonias, we went in for our Breakfast at Tiffany’s moment, and were offered little cookies in Tiffany blue (middle).

We wound up in some odd places, including people’s backyards (above left) and a forested city park used as a meeting place for young men in inappropriate footwear (not pictured).

If there was a likely nectaring source, the monarchs were all over it.  In Tommy Thompson Park, on an island that stretches from downtown Toronto into Lake Ontario, cars are forbidden, so urban biology required us to rent bikes for the day (above middle & right).

Guildhall Park, on the eastern limit of Toronto, is a former artists’ colony where old statuary from demolished buildings is scattered around the park. It has become a wedding emporium, where thistles and joe pye weed covered in monarchs are mixed in with brides from all the world’s cultures (above). 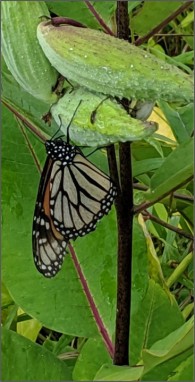 Left: One of our award-winning milkweeds this summer, with 5 large instars (caterpillar stages) all chewing busily. Not much left!

By the August migration, monarchs could reliably be found on bull thistle, which was not a plant I thought of as an important nectaring source. I am unsure whether they favour this plant because it has a lot of nectar, or because it is the only available nectar source. Having spent a lifetime digging up the thistles in my garden, I am now contemplating keeping some.

I must credit the Province of Ontario and the City of Toronto with preserving much of their natural capital: unused areas of public parks have been returned to nectaring plants, and everywhere I went there were conservation areas − often simply a parking lot and a path.

One of the greatest joys was meeting some of the people who had uploaded sightings:

Karen Root has created a gorgeous farm devoted to pollinators. 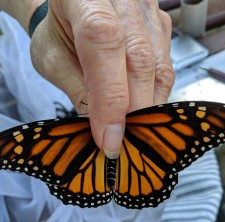 Betty McCulloch has been tagging monarchs for 5 years. Two of the monarchs she tagged from the summer were recovered in Mexico.

Bryson is a budding young entomologist, who created a scrapbook of his insect encounters.

Insects I Have Known 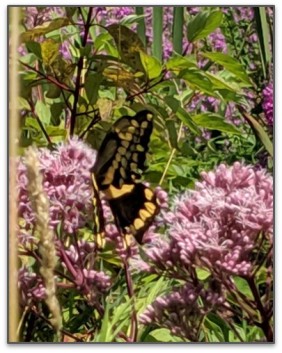 And then there were the bugs! My background is in plant science, so it was a wonder and delight to encounter so many new insect species. We were especially fond of the swallowtails, which like the monarch, seemed to do well that summer. We encountered numbers of giant swallowtails (Papilio cresphontes) around Hamilton (above). This butterfly is so large it must hover while it nectars (making still photography challenging!) 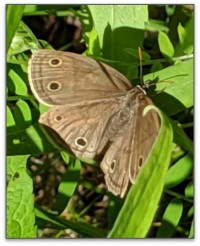 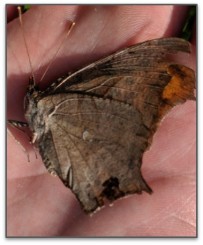 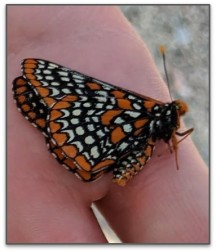 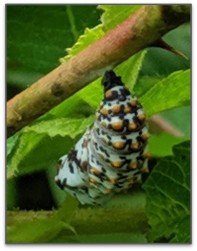 As I couldn’t justify collecting live butterflies without a scientific purpose, we instead became expert spotters of flapping wings by the side of the road, and put up a collection of wings taken from the bumpers of railway trucks encountered at hotels.

After all that, what did we learn? It is still too early to draw any scientific conclusions, as the price for my delightful summer is a winter spent hunched over a computer analyzing data. Anecdotally, however, I am entertaining the theory that either the extent of the likely land cover available to the monarchs in the hotspot, or an attraction to the remnant tall-grass prairie, is inducing them to return to the area, or leading to greater reproductive success there than elsewhere.

Maintaining late-season nectaring resources seems to be vital, especially in Toronto. By August, every monarch was heading in a southwesterly direction. Once they reached Lake Ontario, they turned west along the shoreline. We could stop at a likely intersection and see dozens fly over in minutes. This route brought them straight through Toronto, where nectaring resources were scarce. There were many reports of the numbers of monarchs seen in Toronto this summer. If you planted milkweed, they would come!

I also saw a lot of dog-strangling vine, which is an invasive milkweed that outcompetes the native species, leading to food deprivation for monarch caterpillars. In some areas, it has completely taken over the land where hundreds of monarchs had previously been reported. Now there was none. 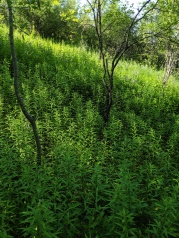 And what of the mottled duskywing? Sadly, we never saw it, but it made us feel the abundance of monarchs even more keenly; a great reminder to cherish and protect what we still have.

Marian MacNair grew up on a farm in the B.C. interior, before becoming a journalist and educator in Montreal. When she isn’t chasing butterflies, she maintains a blog and website: https://marianmacblog.com/