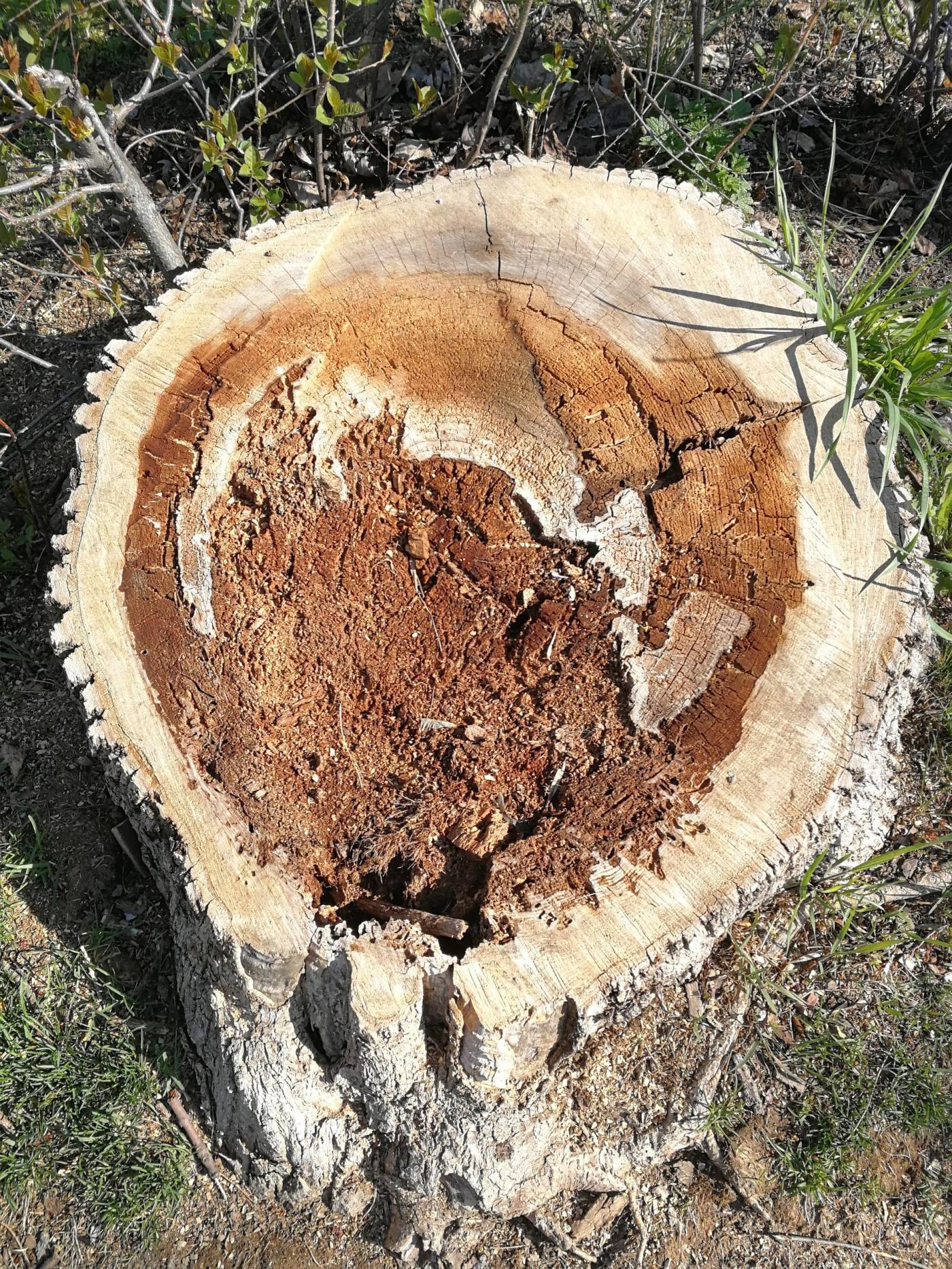 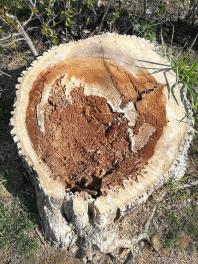 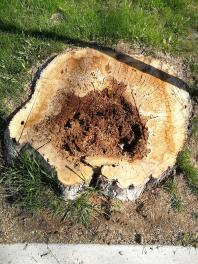 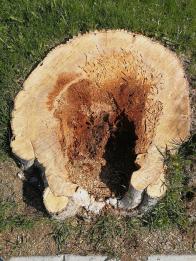 Elegy for the Ash

Marian MacNair hears the trees fall in the forest

All over the island of Montreal this winter, municipalities have quietly been cutting down their ash trees. The walk to my children’s school passes stump after stump. A hike through the park looks like it was logged, and far from all the ash have been cut.

It is a quiet tragedy occurring all over eastern North America. The numbers are staggering: there are some seven billion ash trees on the continent. Ash accounts for at least a quarter of the tree canopy in many urban areas. All the ash trees in an infected area can be dead within five years. You just go out one spring and they are gone.

The die-off is caused by the emerald ash borer, an Asian beetle that arrived in the early 1990s and is decimating ash tree populations across the continent. A Google search documents the dying of hope: in the first decade, articles exhort areas to keep out the borer, or proffer plans to isolate or inoculate trees with insecticide. Now it is just city after region after municipality, announcing how they are going to go about getting rid of their ash trees.

I think we can conclude that if an ash tree falls in the forest, scarcely anyone hears it anymore. But I would like to make a sound and appreciate the ash tree. 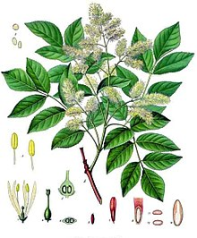 The ash tree is in the same family as the olive. Versions of the name can be found in most European languages, which means it probably dates back to the steppe horsemen who spoke the original of our languages. It always means spear, probably for the speartip shape of the leaves or the seeds, or a suggestion for its use.

The ash is a pioneer species, its samaras–helicopter-like seeds–fluttering on the wind into every opening. It was the first tree species to follow the glaciers’ retreat northward in America.

But the ash is not cold-hardy. Yet populations can be found as far North as Hudson’s Bay, remnants of a warmer world. In a triumph of determination over adversity, the ash, unlike cold-tolerant species, must rebuild its active cellular structures from scratch each year before it can leaf. You will often see giant splits down the bark of an ash, where its freezing cells have burst and ripped open the bark. This is why it is one of the last species to leaf. It has to work harder than the others.

It is fast-growing but strong, preferred by woodworkers for its flexible, tough wood. It is used to make tool handles, lacrosse and hockey sticks, oars, bows, baseball bats, snowshoe frames, guitars, drums, veneers, chair backs, church pews, boat ribs, lobster traps, staircases, and basketware, to name a few. There are/were many ash plantations in Europe and the U.S., and it was often planted on soil beds after strip mining.

It is adored by worms. Go out in the fall a week after the ash leaves have come down. You will still find maple and oak and beech, but the ash leaves will have disappeared, pulled underground. 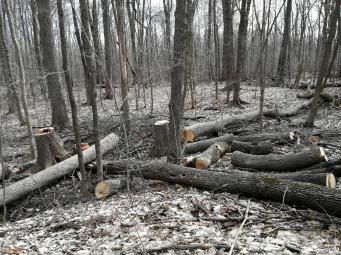 It is also adored by the emerald ash borer. Sadly, this tough love is merely the most damaging in a long history of successful invasions. The chestnut blight pretty much wiped out 3.5 billion chestnut trees in the early 1900s, while Dutch elm disease killed about 200 million elms, reducing the once mighty tree to a shrub. (The fungus takes several years to kill saplings.)

There is a terrible sense of helplessness for those present at an invasion: the beach near my house used to be full of large river mussel shells. No stranger to adversity either, the river mussel survived mercury and other offenses poured on its head during the heyday of American manufacturing. Yet now they are disappearing, replaced by tiny, invasive quagga mussels (similar to zebra mussels.) Already troubled by the hazards of its epic migration, monarch butterflies are facing the incursion of an exotic milkweed species–dog-strangling vine. It is rapidly overtaking the native milkweeds the butterfly requires to nourish its caterpillars.

Growing up in the interior of British Columbia, my family remember the day the starlings arrived. The starling was a deliberate invasion, brought over in an act of supreme foolishness from England to New York’s Central Park to recreate the style of an English park. After finally getting around the Rockies, they arrived in the Okanagan valley around 1977, where they chucked out the bluebirds and the orioles that used to nest in our trees. My dad gave my 10-year-old brother a shotgun for his birthday, and told us to get to work. The starlings are still around (as is my brother, luckily!) 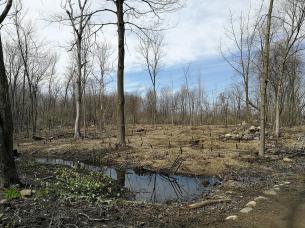 In an attempt to forestall the loss of all hope, scientists have been scrambling for solutions. They are experimenting with bringing in such borer foes from their native Asia as a pathogenic fungus or a small parasitic wasp. But the cure could be worse than the disease: what else might the new bugs like to eat?

Though many municipalities’ policy is to inoculate a few trees and cut the rest, not all ash succumb. The American Forest Service encourages people to report ‘lingering ash:’ trees which have survived 95% ash tree mortality. Only 60% of blue ash, a sub-species, die off. Ash is a champion stump-sprouter, so there will be saplings growing from 7 billion stumps. Like the elm, the borer won’t get them for a few years, so ash will join the ranks of the shrubbery. Whether it will die out completely will depend on whether it can set seed before the borer kills it.

Having large sections of forest canopy suddenly open will allow other invaders access. There are whole sets of species that require deep canopy shade who will die back if exposed. Erosion will increase. A scientific journal devoted to Biological Invasions lists 43 insects that rely on ash trees for sustenance or breeding. In turn, such insects feed birds, and on down the trophic chain things change. 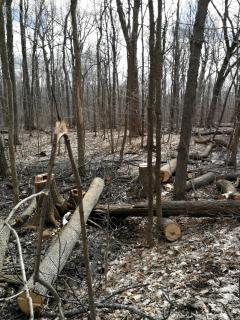 And what do you do with 7 billion dead trees? Sadly, despite the wood’s many great qualities, most around here are being chipped or chopped into firewood, the final indignity. Some municipalities have done better, organizing to use the wood in various ways and holding seed-gathering parties.

Sarnia held a memorial service. It is part of an art project to commemorate the ash. Mourners could leave bird-seed at locations throughout the forest, and purchase reliquaries made of ash wood.

In geologic terms, all this is just a blip on the biological timeline. It is hard to even imagine what the forest was like for the first explorers crossing over the Bering Strait to North America. The holes in the canopy will close, municipalities will plant new trees (hopefully more diverse), and like the chestnut and the elm, most won’t even realize what is missing. But anyone who has taken a walk in an urban park and a deep forest will realize there is a difference.

The trees fall in the forest. But they only make a sound if we hear them.

In the grand tradition of the Irish wake, here is the worst dirty tree joke ever:

Out in the forest lived a birch tree and a beech tree. A sapling was growing between them.

A woodpecker flew by and landed on the trees.

They asked, “Would you go down there and see if that’s a son of birch or a son of a beech?”

The bird said “sure.”

When the woodpecker came back it said, “Gentlemen, that is neither a son of a birch nor a son of a beech, but the best piece of ash that I have ever stuck my pecker in.” 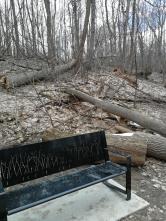