We Will Always Have Wasps

Coping with biodiversity loss in the Anthropocene

The purple martin swallows returned again this year. One of the last populations left in Quebec nests nearby. They occupy only a fraction of the nest boxes they once did, but they cling on.

They arrived right on time this year, but the bugs didn’t. It was cold, and the skies were empty of sustenance for an aerial insectivore.

Each spring I await heartbreak: one of these years, they won’t return. The clouds of insects that once brought them north to nourish their young  are gone. Our dislike of insects has likely starved them and their songbird brethren. These astonishing aerial acrobats with their iridescent plumage and fluting cry have declined by 90% in their North American range. It seems only a matter of time before the lighthouse where they nest stands empty, a warning to us all of the cost of our comfort.

Spring, which formerly was a time of great joy for anyone interested  in the blooming of the natural world, has become fraught. As the air warms and the water thaws, I begin an anxious census: have they  returned?

Much has been written about the restful benefits of communing with nature in this isolating time. But for naturalists, nature has become a battleground strewn with the ghostly outlines of the bodies of the missing.

I have an image in my head. It is a line drawing of a biologist in a sunhat, slumped in a corner, clutching a net, as the last butterfly, moth, insect or bird, the object of a lifetime of study,  flutters to the ground before them.

It is a rough time to be a naturalist. Their  mood is sliding downward in parallel with the trend lines on their species abundance data. I call it DBS: Depressed Biologists Syndrome. Watching a beloved species dwindle is like trying to carry a leaking bag. Biologists are facing the possibility that they will be obliged to seek work in different fields in the future. “Certainly , I often feel angry, frustrated and helpless about a great many conservation issues,” says Kyle Elliott, professor of avian ecology at McGill University.

But you can fight back.

Kristen Lalla is a surprisingly upbeat McGill student who studies the migration patterns of purple martins. But she has a problem: there are almost no birds left to study. If you are down to your last colony, you are not likely to let someone interfere with your birds, no matter how vital their research.

That hasn’t stopped Lalla: “Knowing that purple martins were in decline was one of the motivating reasons behind taking on this project. I was compelled to try and understand some of the knowledge gaps that may allow for better conservation planning. Feeling like I could possibly make a difference for this species motivates me to continue.”

Urban life is so isolated from the nature that supports us that we often do not recognize what has already been lost, and what is threatened. It is evident if you look for it: twenty years ago I would need to stop every hour to clean my motorbike visor of insects. Now I can travel from Montreal to Toronto with scarcely a single bug sacrificed to my windshield. In the several years my daughter has played soccer, the insects that used to cloud the giant lights during evening games have now vanished. 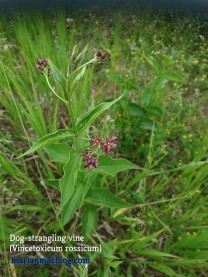 Urban parks have low biodiversity, and are often overtaken by invasive species.  The ash, elm and chestnut trees that used to grace our streets have been lost to exotic pests. Dog-strangling vine, an invasive milkweed, is wiping out the native version in Ontario. This is further endangering the beleaguered monarch butterfly, whose caterpillars rely on native milkweeds for food. Brides pose in front of tangled infestations of the vine in Toronto parks.

“Everyone is reading the ‘big’ headlines about declining species or wildfires in the Amazon,” asserts Elliott, “but know little about their own backyard. Local habitat issues in Quebec or Canada are seldom in the news…we are losing the local sources of information that are so critical to making important decisions. We need to become more involved locally, and invest in local news, local politics and what is happening near to us.”

It is on the margins, where the frog pond is lost to a housing development, that these changes are more apparent to anyone not in the business of counting wildlife. Quebec is conducting aerial spraying against spruce budworm, a native pest that cycles through outbreaks. That means killing all species of caterpillar that eat the sprayed leaves in a forest. Entomologists say the moths never recovered the last time this occurred. But losing the shelter of the trees will further endanger the few remaining southern caribou (and the logging industry). Yet there was little public reaction to the project.

Areas with traditional agriculture have become dead zones. Even the puddles near fields were found to contain dangerous insecticide levels1, and birds are not as successful nesting nearby. Ironically, urban areas are becoming refugia for some species2.

Losing their insect food sources is starving birds, and our desire for tidy lawns and lakeshores is destroying nesting areas. “I feel  like the general public doesn’t know a lot about the purple martin’s situation,” says Lalla. “I think the education system should teach kids more about local wildlife.  If more people knew about the problem, they would care more.”

We will always have wasps

You don’t need a degree in biology to lobby political leaders or upload species sightings. So maybe we should fight harder to save what we can, and revel in what we have. While insects such as butterflies and beetles avoid urban environments, wasps and ants do better there than elsewhere2. We will have to learn to love the ant, gull and squirrel.

We are told such species are a lot like us: adaptable and opportunistic. Such qualities may come in handy to counter the vicissitudes of conservation: insect populations, for example, fluctuate wildly. Monarch butterfly numbers returning to their winter refuge in Mexico in 2018 doubled. But only about half as many returned to the forest last winter. Something happened along the way. Then two forest rangers were murdered in the refuge, presumably over attempts to stop illegal logging of the trees upon which the butterflies roost.

It isn’t going to be easy to keep the needed army of volunteers motivated if their species disappears, but many are willing to try. “Knowing that a species isn’t doing well,” says Lalla, “drives a lot of people to do conservation work, I think. If a species isn’t extinct, there’s still hope, so we need to do something while we still can.”

All over the world, citizen scientists, such as Betty McCulloch (above), tag butterflies, count frog calls, or record bird sightings in a myriad of contributions scientists now rely upon for their data. “At this point,” says Lalla, who eventually located some subjects to study, “I’m cautiously optimistic. I know a lot of great people who are working on purple martins and other aerial insectivores, and so I hope that all this new information will lead to action.”

The martin decline has stabilized recently, due in part to the intensive work of nest box owners, says Elliott. “I find solace in the many friends and colleagues that are working to solve these issues. I hope that we can one day have purple martins in people’s backyards across southern Quebec.”

I too am motivated by hope: the weather has warmed, the caddisflies are hatching, and the martins turn and dive above the water. The first black swallowtail butterfly has wafted into my garden. The monarchs are one warm wind behind.

I have a dream that the sky above Montreal glows orange each fall with monarch butterflies rising and turning to head south, connecting us in a thousand-mile chain to Mexican mountains where no park rangers are murdered because everyone is watching.

Marian MacNair created a phenology calendar for McGilll University’s Morgan Arboretum listing events as they happen during a year in nature. You can read more about her adventures chasing butterflies for her thesis on monarch preferences in Canada on her blog.